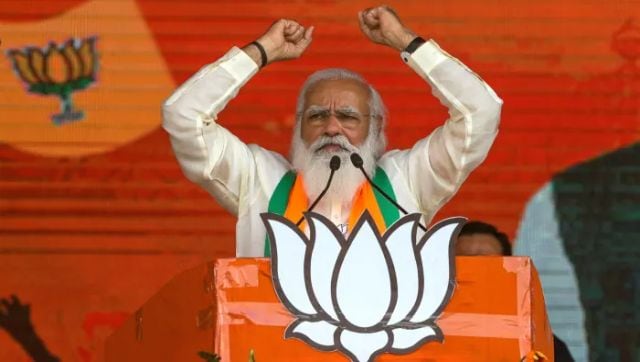 Unlike Modi, who served in the top office for more than 12 years, both Anandiben Patel and Vijay Rupani quit before their terms could end

In an abrupt move, Gujarat chief minister Vijay Rupani resigned on Saturday, becoming the fifth chief minister to leave the top post in a BJP-ruled state in six months.

Rupani’s exit came after helming the state for five years and 36 days, and with just over a year to go for the Assembly polls.

With his exit, first-term MLA Bhupendra Patel was on Monday sworn in as Gujarat chief minister.

The 59-year-old, unanimously elected BJP legislature party leader on Sunday, was sworn in as the state’s 17th chief minister by Governor Acharya Devvrat at a simple ceremony in Ahmedabad.

However, Rupani’s exit and Patel’s appointment to the high post begs a question: Will Gujarat ever see a chief minister like Narendra Modi?

Rupani is the second chief minister in the state not to finish their term. In 2016, former chief minister Anandiben Patel made way for Rupani, just months before the state voted for a new Assembly.

Anandiben Patel succeeded Narendra Modi as the 15th chief minister after the latter was elected as prime minister of India in 2014.

When she took the oath of office in May 2014, she became the first female chief minister of the state.

During her tenure as chief minister, some of the biggest challenges she faced were the Patidar quota stir and the subsequent defeat of BJP in the district and taluka panchayat polls. Patel admitted that she too faced several challenges during her tenure but maintained that no leader can have the luxury of a smooth sail.

In fact, marking her second anniversary in office, she had written on her blog, “To fulfil the aspirations of 6.5 crore people is a daunting task, and we are all going about this with sensitivity and strength of purpose that becomes stronger with every passing day.”

However, in August of 2016, shortly before elections were to be held in the state, Patel, decided to step down, saying it was time for new leadership to take over.

She was in office for two years of her five-year term and many believed that her exit was due to pressure from the top leadership of BJP, owing to the party “losing ground” in the state.

Her exit paved the way for Vijay Rupani, the low-profile Rashtriya Swayamsevak Sangh man. At the time of his ascension, he had just fought his first Assembly election in 2014, winning a bypoll from Rajkot West.

Experts had stated that his elevation to the top post was seen as a recognition to the Jain community, which had been accorded minority status by the state government.

In 2017, he was back in the chief minister’s chair after having survived the incumbency factor and a violent quota stir by the Patidars.

However, many had noted that Modi had gone all out during the campaigning for the state polls in 2017. The BJP managed to win the state with 99 seats of the 182-member Assembly.

And then the shoe dropped on Saturday, when Rupani too announced his resignation, 15 months ahead of the state going to polls.

According to sources, the party was not so confident of facing the next elections in Gujarat under his leadership. Additionally, Rupani is not seen as the most dynamic face.

situation and the party was sensing some anger in the urban areas.

Incidentally, Rupani was also chosen as the chief minister in similar fashion 15 months before the 2017 assembly elections in the state, replacing Anandiben Patel.

The state before Anandiben Patel and Vijay Rupani had stable governance under Narendra Modi for more than 12 years.

Experts say that one of the main reasons that the state has seen political upheaval is because no other state leader has been able to match Modi’s style of absolute leadership.

According to political analyst Jatin Desai, who spoke to the BBC, Patel and Rupani were constantly compared to Modi and fell short of expectations.

“Modi never faced any challenge — both in the state and from the central BJP leadership — during his tenure in the state. He was able to carve out an image of a pro-development leader and no other politician has been able to compete with that,” he was quoted as saying to the BBC.

However, some other experts are of the opinion that changed chief ministers twice to prevent another leader from becoming prominent in his home state.

Hari Desai, who has followed Gujarat politics for decades, has said that the prime minister wants to protect his legacy in Gujarat.

Another analyst noted that Gujarat chief ministers have been largely titular since May 2014 when Modi shifted to the Centre. K Kailashnathan, Modi’s confidante in Gujarat Chief Minister’s Office who has got six extensions since 2014, ran the administration in consultation with Delhi.

Bhupendra Patel as a CM, a first-time legislator, has surprised analysts. The 59-year-old is an MLA from Ghatlodia constituency in 2017. But experts say this is a calculated move.

Patel is a Patidar, which is a politically influential community. Patels have traditionally voted for the BJP. But reports say the group has lately been upset with the party over its lack of representation in the government.

Will Modi-Shah’s experiment with Patel work? Next year’s Assembly elections will provide the answer.

With inputs from agencies