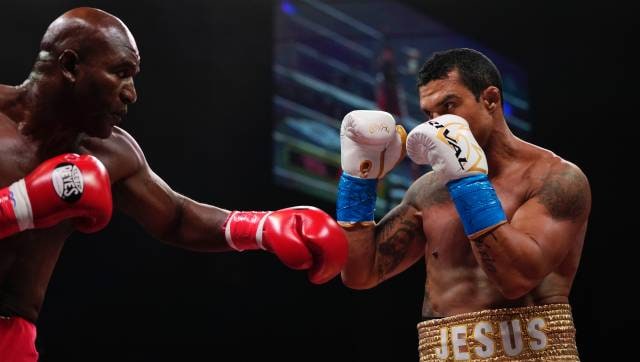 The latest punch to the fans’ you-know-what in this most brutal of sports took place over the weekend when boxing legend Evander ‘The Real Deal’ Holyfield took on MMA icon Vito Belfort in an “exhibition” under the Triller Fight Club banner.

Sometimes it’s hard to be a boxing fan.

The latest punch to the fans’ you-know-what in this most brutal of sports took place over the weekend when boxing legend Evander ‘The Real Deal’ Holyfield took on MMA icon Vito Belfort in an “exhibition” under the Triller Fight Club banner.

While one can argue that “exhibitions” between celebrities, YouTubers and retired legends have their place in the business – something heavyweight champion Tyson Fury argued in favour of – for many, the bout between Holyfield and Belfort was a bridge too far.

Holyfield, one of the true legends of the hurt business, is 58 years old. He came in on one week’s notice to replace Belfort’s original opponent Oscar De La Hoya, who was hospitalised with COVID. No man at that age should ever have to take punishment for money, especially shots to the head.

Holyfield, who, while not even in his prime, famously beat down Mike Tyson – not once but twice – looked so bad in the “training videos” he put out that some on social media openly speculated that he was baiting Belfort into not taking him seriously.

While Belfort was a novice in the squared circle, he was a truly dangerous opponent for someone of Holyfield’s age. Even those with a passing knowledge of combat sports history know that Belfort is tied for the most knockouts in UFC history and is blessed with the most precocious of gifts that can be bestowed on any fighter: heavy hands.

And if you have any doubt as to what was an offer, former US president Donald Trump was providing alternative commentary throughout the night and offering such gems such as: “It’s like the elections. It could be rigged” [it wasn’t] and “the people seem to prefer politics rather than boxing”.

The “exhibition” ended in round one. Cosmetically, Holyfield looked incredible. But in the ring he looked like damaged goods. Slow, shuffling and wildly off balance. Belfort did little but swarm the boxing legend and tagged him a couple of times. Mercifully, the referee chose to stop the bout.

As per Compubox, Holyfield threw eleven punches and connected on a grand total of one. Belfort winged 22 punches at Holyfield and landed eleven. After the fight, Belfort called out, who else, but Jake Paul. Yup. *That* Jake Paul.

“Hey Jake Paul, stop running from me,” Belfort said. “You can be my son. I’m going to put you in my lap. You’re going to sleep like a baby.”

With the ascendancy of the Paul brothers, boxing is in a strange place right now.

Meanwhile, the fight between Manny Pacquaio and Yordenis Ugas, which perhaps saw the Filipino icon lace up his boxing boots for the last time, did an estimated 200,000 buys. Ugh.

Meanwhile, the fights that the fans want just aren’t getting made.

Pacquiao, to be fair, was all set to deliver.

In a truly GOAT move, he was set to take on perhaps the toughest challenge in the welterweight division: Errol Spence. Unfortunately, Spence dropped out of the bout after doctors discovered a detached retina in the lead up to the fight.

Pacquiao then lost rather easily to Ugas, leading many to hail lady luck for the possibility that he escaped the fate of so many that hung around the sport for far too long; a brutal beating at the hands of a young, hungry lion.

But then Pacquiao, unlike a majority of his contemporaries and some self-proclaimed greats, has never shied away from challenging himself.

Fury, for all his accomplishments at heavyweight, has a history of pulling out of boxing matches. The latest being his rematch with fearsome puncher Deontay Wilder. While Fury was diagnosed with COVID-19

, the boxer acted irresponsibly by simply not taking his second shot of the vaccine. Meanwhile, the dream match between Fury and fellow Brit Anthony Joshua seems like a mirage in the desert. Just always out of reach.

On Tuesday, lightweight king Teofimo Lopez said he saw “no point” in having a rematch with Vasiliy Lomachenko, who he outpointed in a unanimous decision last October. Perhaps Lopez’s reasons for moving on to bigger and better things are genuine. Or perhaps it’s in no small part down to the fact that Lopez, in the eyes of many, lost most of the rounds in the latter half of that fight.

Regardless, Lomachenko, who put on a mesmerising performance against Masayoshi Nakatani in June, deserves a rematch. The fans deserve a rematch. The less said about Gervonta Davis, Ryan Garcia and Devin Haney the better. Never has Lomachenko’s “four kings of Twitter” jab (directed at them as well as Lopez) rung more true. Instead, what boxing fans get are these freak, sideshow fights.

But we have a choice. Not to support this garbage with our eyeballs and clicks. Legendary announcer Jim Lampley, who was involved with HBO boxing for decades, was all set to call the bout between Belfort and De La Hoya. Instead, he did the classy thing once Holyfield was entered the fray: walk away.