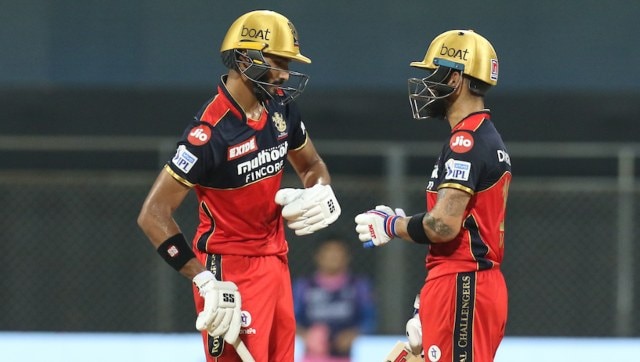 The Indian Premier League’s (IPL) 13th edition has been one of the better seasons for Royal Challengers Bangalore (RCB) so far. The Virat Kohli-led franchise was placed at the third position in the points table, with 10 points from seven matches, before the season was called off in May owing to the COVID-19 outbreak across different franchises and camps.

Now, with the league’s second half taking place in the UAE from 19 September, the franchise will aim to capitalize on their fine start to the tournament.

Let’s take a quick look at their campaign so far:

RCB began their campaign in style, with a win over defending champions Mumbai Indians (MI).

After being asked to bat, MI posted 159 in 20 overs, courtesy contributions from Chris Lynn (49 off 35 balls), Suryakumar Yadav (31 off 23 balls) and Ishan Kishan (28 off 19). It seemed like the franchise would score much more, but RCB wonderfully pulled things back, all thanks to Harshal Patel (5/27), who was phenomenal at the death.

In reply, Virat Kohli (33 off 29), Glenn Maxwell (39 off 28) and AB de Villiers (48 off 27 balls) all stepped up but a flurry of wickets in the deep end of the chase meant RCB were made to work hard to get past the winning total.

With their morale high after a win over MI, RCB beat Sunrisers Hyderabad (SRH) by six runs in a thrilling contest.

Having lost the toss, RCB were put into bat but barring Glenn Maxwell (59) and Virat Kohli (33), the other batters failed to make any sort of impact. The Kohli-led side managed to score 149.

All eyes were now on the side’s bowling, which has been infamous for letting them down on a number of occasions in the past.

Until David Warner (54) and Manish Pandey (38) were at the crease, the chase looked like a cakewalk for SRH. Unlike the previous game, where Harshal hogged the limelight, RCB’s bowling unit – Shahbaz Ahmed (3/7) and Mohammed Siraj (25/2) and Harshal 2/25 – stepped up in tandem to eke out a six-run win for the franchise.

RCB made it three wins in a row with their commanding victory over Kolkata Knight Riders (KKR).

Opting to bat, RCB were in a spot of bother, with their top order failing to fire. It was then that de Villiers (76 off 34) and Maxwell (78 off 49) feasted on the KKR bowlers to propel RCB to a massive total of 204/4.

In reply, there were brief cameos from Shubman Gill, Rahul Tripathi, Eoin Morgan, Andre Russell, Shakib Al Hasan, but all of them squandered their starts. All KKR could manage was 166/8. Jamieson was expensive but picked up three wickets, while Harshal and Chahal scalped two wickets apiece

RCB were proving to be the team to beat in the first half of IPL 2021. They were too good for RR and claimed a commanding 10-wicket win.

Chennai Super Kings (CSK) was the team that finally put an end to RCB’s winning run as they notched up a 69-run win.

The MS-Dhoni led side registered a total of 191/4 after opting to bat first. Openers Faf du Plessis (50 off 41) and Ruturaj Gaikwad (33 off 25) played well but Ravindra Jadeja starred with the bat, smashing 62 off 28, including five sixes and four fours.

After RCB’s bowling attack was taken to the cleaners, their batting looked out of sorts, barring Padikkal (34), and all Kohli’s men could manage was 122/9 in their 20 overs. With the ball as well, it was Jadeja (3/13), who did the bulk of the damage, conceding 3.25 per over.

RCB were in for another test when they took on defending champions Delhi Capitals (DC). And Virat Kohli’s men claimed a thrilling one-run win over DC.

Put in to bat, a masterclass by de Villiers (75 off 42) powered RCB to 171. Rishabh Pant (58 not out) and Shimron Hetmyer (53) gave RCB a real scare, but Siraj (1/44), who had otherwise proved costly, held his nerve in the final over to snatch victory from the jaws of defeat.

In their last game before the IPL was indefinitely postponed, RCB suffered a 34-run loss against Punjab Kings (PBKS).

RCB were clearly not at their best with the ball. Kohli and Patidar were among the runs, but apart from Harshal (31 off 13), the other batters failed to keep up with the scoring rate, which resulted in an easy win for PBKS.