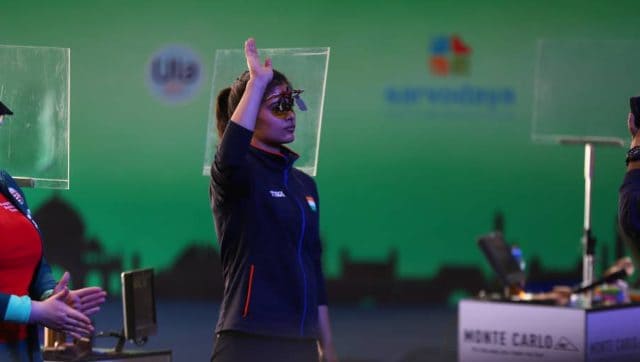 Firstpost.com takes a quick look at star Indian shooter Manu Bhaker over the past two years, and charts her journey towards securing Olympic qualification.

Among the host of athletes that have made their presence felt after the debacle of Rio Olympics, Manu Bhaker is perhaps the most promising. Billed as a genuine medal contender in Tokyo, the 19-year-old shooting sensation will represent India in 10-metre air pistol (individual and mixed team) and 25-metre sports pistol events.

A prodigal talent proficient in multiple sports, Manu Bhaker’s success story began with a silver medal at the 2017 Asian Junior Championships. She followed it up with an incredible nine-gold haul at the National Games the same year, defeating World Cup medalist Heena Sidhu with a record-breaking score of 242.3 points in the final of 10-metre air pistol event. She hasn’t looked back since.

A twin gold at the ISSF Shooting World Cup in Guadalajara (individual, mixed team), top finish at the Commonwealth Games, and a gold and silver at Youth Olympics made 2018 a year to remember for Manu despite a below-par result at the Asian Games.

After failing to make it to the finals (10-metre air pistol) at World Cups in New Delhi and Beijing, Manu’s fourth-place finish in Munich earned her an Olympic quota. She followed it up with a gold at Putian World Cup in China to announce her return to form and seemed primed for a strong show at the Olympics before COVID-19

The ISSF Shooting World Cup in Delhi was postponed, and later cancelled. It was followed by the postponement of Olympics itself, leaving all athletes in a lurch. Manu spent her time in lockdown painting, sketching, studying, and of course, shooting. There were challenges aplenty. The primitive, manual machine would break often, and the open range meant monkeys messed up with her shooting.

The national camp resumed towards the end of 2020 and Manu participated in the Delhi World Cup held in March this year. She returned with a medal in each of the three Olympic events she is slated to take part in Tokyo – bronze in 25-metre pistol, silver in 10-metre air pistol, and a gold with Saurabh Chaudhary in 10-metre mixed team event.

The shooter received her first dose of vaccine in April and urged everyone to follow COVID protocols.

“I appeal to everyone in the country to religiously maintain COVID protocols, including maintaining social distancing, hand washing, hand sanitising and wearing masks.

“Please get yourself vaccinated, avoid crowded places in the markets and keep following the health department guidelines from time to time,” she said in a video on Twitter.

Ahead of the Olympics, Manu, along with Tokyo-bound shooting squad, travelled to Croatia for final tune-up. The team received much-needed match practice thanks to participation in the European Championships. Manu, meanwhile, juggled her semester examination from Croatia.

“I will manage both, as I have done in the past. At least I don’t have competition on days I have my papers, so it’s manageable,” she said.

At the ISSF World Cup in Osijek, Croatia, her final event before the Games, Manu claimed silver alongside Saurabh Chaudhary. The Indian pair lost 12-16 in the final to the reigning world champions, Russia’s Artem Chernousov and Vitalina Batsarashkina. While Manu finished seventh in the women’s 10m air pistol event, she had earlier claimed another medal – a bronze in the women’s 10m air pistol team event with Rahi Sarnobat and Yashaswini Singh Deswal.