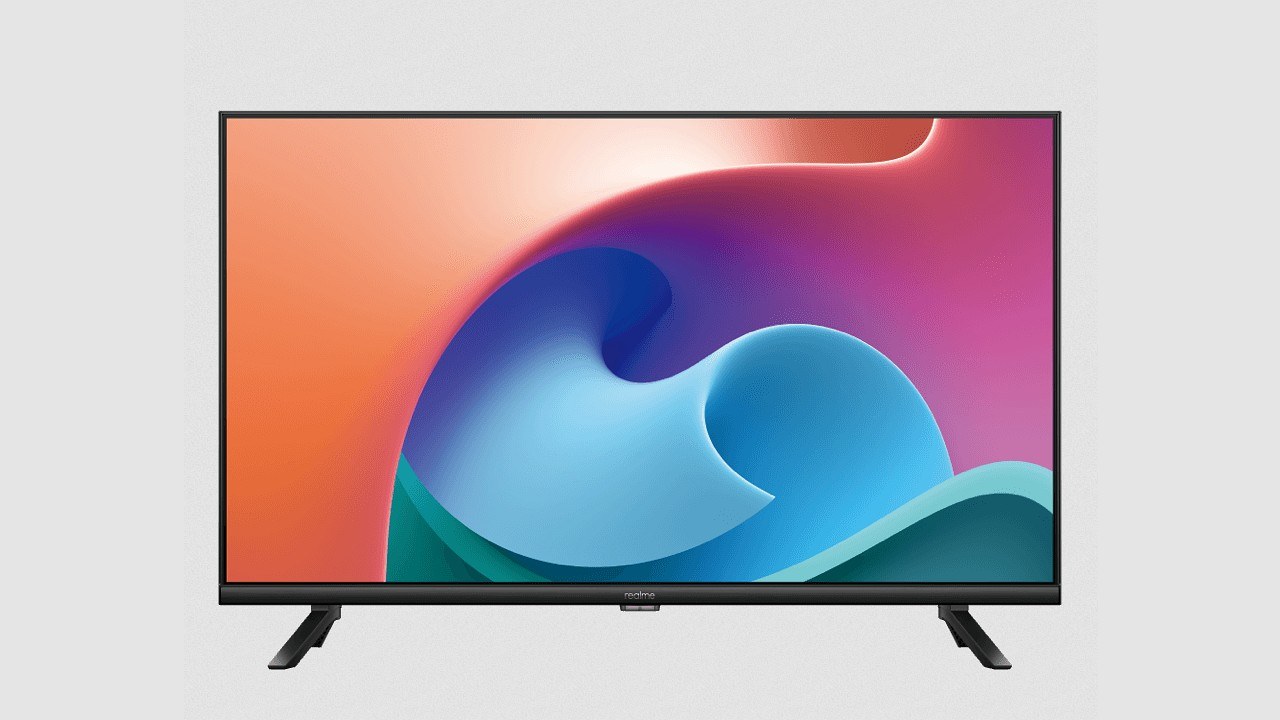 Over the last few years, Full HD resolution in a 32-inch TV has been a rare occurrence. Interestingly, that combination was quite popular a decade ago during the non-smart TV era. Eventually, manufacturers sacrificed the extra pixels to keep costs down as smaller screen sizes were targeted primarily at price-sensitive buyers. Realme so far has been playing safe in the smart TV segment with the choice of its screen sizes and resolutions. Now, the company has decided to get a bit more adventurous with a new 32-inch Full HD Smart TV. Time to find out if it was a smart decision.

The design is quite neat, with the TV going near bezel-less on three sides. It has a noticeably thicker bottom bezel with a tiny chin at the centre that hosts a power LED and IR receiver. The TV can easily be wall-mounted or placed on a desk using the bundled stands. The plastic stands are very light but hold the TV firmly in place. The wall mount kit isn’t provided in the package and probably needs to be purchased separately. The necessary screws are bundled along with their usual wireless remote control and a pair of AAA batteries.

In the connectivity department, you get three HDMI ports – one of which supports ARC, two USB 2.0 ports, digital audio out, A/V input and a LAN port. All the ports can be found on the left side of the TV. Since this is a compact sized TV, the ports are easy to reach even if you wall mount it. You also have a couple of wireless connectivity options in Bluetooth 5.0 to connect to wireless speakers or headphones and 2.4 GHz Wi-Fi with support for b/g/n standards. While one can look past the lack of support for 5 GHz Wi-Fi in this segment, I would have preferred a 3.5 mm analogue audio output on this TV.

In the connectivity department, you get three HDMI ports – one of which supports ARC, two USB 2.0 ports, digital audio out, A/V input and a LAN port. Image: Tech2/ Ameya Dalvi

This TV has a 32-inch panel with a Full HD resolution of 1920 x 1080 pixels and a 60 Hz refresh rate. The peak brightness figure hasn’t been mentioned, but it claims to support a couple of HDR formats namely HDR10 and HLG. This TV is powered by a quad-core Mediatek chip with four ARM Cortex A53 cores and Mali-470 MP3 GPU. Each of the four CPU cores can throttle between 1000 MHz to 1300 MHz. You get 1 GB RAM and 8 GB of internal storage, a chunk of which is taken up by the official Android TV 9.0 OS.

Sound output is rated at 24 Watts RMS with support for Dolby audio. Like all certified Android TVs, it has Chromecast built-in and lets you cast content to the screen from compatible apps on your phone or tablet. You get the usual Realme wireless remote control, which is quite good. It is compact, clutter-free but doesn’t miss out on any important buttons. The remote here has dedicated keys for settings, input selection and mute along with the usual navigational keys, volume control and hotkeys for Netflix, Prime Video and YouTube.

The remote is voice-enabled, so you can bring up the Google Assistant by pressing the corresponding key and issue voice commands. Image: Tech2/ Ameya Dalvi

It operates over IR and Bluetooth both. The power button on the remote communicates with the TV using IR when switching it on, and then the rest of the things operate over Bluetooth once it is paired with the TV. The remote is voice enabled, so you can bring up the Google Assistant by pressing the corresponding key and issue voice commands. It is slightly slow to react after you issue a command, but does a satisfactory job.

I wonder why Realme has gone back to Android TV 9.0 when most of its prior launches this year ran Android TV 10.

The Realme TV runs Android TV 9.0 OS and has a stock user interface that you see on most official Android TVs without any third-party launcher. I wonder why Realme has gone back to Android TV 9.0 when most of its prior launches this year ran Android TV 10. And that’s not the only thing the company has rolled back. Unlike its recent TVs, where you could access picture and sound settings on the fly from any input or app, this 32-inch TV allows you to do that only when using an HDMI or USB input.

Despite having a dedicated settings button on the remote, you cannot access those options when viewing something on any of the OTT platforms or even from the home screen. You have to venture deep into the Android settings to tweak the picture or sound. Not very smart, that, and certainly not in 2021. Beyond that, the UI is simple to use. You have rows for your preferred installed apps and last played or suggested content from various OTT platforms. Apps for Netflix, Prime Video are pre-installed along with a few popular Google services. There’s Google Play Store, too, that gives you access to a lot more apps.

The picture quality here is pretty good for a budget TV. The panel is bright, and given the higher pixel density, the picture looks quite sharp on this TV. The colour reproduction is excellent, too. Though vibrant, colours look slightly saturated out of the box, and some may even like it that way. For the rest, this Realme TV offers ample options to finetune the picture to your liking. You get the usual settings for brightness, contrast, saturation, sharpness along with advanced options to adjust for gamma, white balance and an elaborate colour tuner.

The contrast is generally quite good for the segment, but the black levels aren’t the best. They often appear dark grey and at times have a bluish tinge. Some of the details in darker areas on the screen in our test videos were visible only after pushing up the brightness a little bit, else they appeared a bit too dark. One can also notice some distinct flickering in high-contrast scenes, especially in HDR videos. But let’s not forget, this is a sub- Rs 20,000 TV and overall performance is quite impressive for the segment.

Overall, 1080p content looks sharp and vibrant on this TV with lively colours. I must add that skin tones look quite natural on this screen, something not many budget TVs can brag about. 720p videos look almost equally good. Anything lower than 720p up to DVD quality is also watchable here as the shortcomings aren’t too conspicuous on this small screen. The viewing angles are perfectly acceptable with little colour shift when watching the TV from sharp angles. Lastly, it is quite a handy screen to plug your laptop in using HDMI and extend your display. Things look sharp and legible.

Looks like Realme has used the same speaker setup from its 2020 43-inch TV. You get two pairs of bottom-firing speakers rated at 24 Watts RMS (total) that deliver Dolby-certified audio. Each speaker module has a full-range driver to take care of mids and lows as well as a dedicated tweeter to handle the high frequencies. The audio output of this TV is loud and clear, and quite punchy for a small TV. Loudness can vary depending on the source, but it is generally loud enough at 50 percent volume in a mid-sized room.

There is ample clarity in the vocals and a touch of warmth in the sound, but do not expect thumping bass. The speakers are tuned well out of the box, and you have a few more sound adjustments to tweak the audio further. Dolby Audio is disabled by default and needs to be enabled from the sound settings. It’s best to leave it on all the time because the overall audio sounds better irrespective of whether the source audio is Dolby-compliant or not.

The TV speakers are good enough for general audio needs like watching news, sports, the odd web series or listening to music. If you want extra oomph, you have a handful of audio outputs on this Realme TV such as HDMI ARC, digital audio out and Bluetooth to plug in a soundbar or a speaker system. Mind you, there is no 3.5 mm jack here, so make sure your external speakers are compatible with the output options present on this TV.

The TV takes about 40 seconds to boot up when you switch it on from the mains, which is standard for an Android TV. Post that, if you switch it off and on from the remote, the TV comes back on in just a couple of seconds from standby mode, so no issues there. There is no noticeable lag in operation, be it with the UI or when watching content. Yes, there is a slight delay in the voice assistant’s response at times, but it isn’t alarmingly slow.

The default media player on this TV is quite nice and it managed to play most of our test videos with various codecs smoothly, except 4K videos. Using a different player didn’t help either. Given that this is a Full HD screen, it is not something many would care about, but it would have been nice to have the option. Beyond that, there weren’t any glaring issues to report.

The Realme Smart TV Full HD 32 can be purchased on Flipkart and on the company’s website for Rs 18,999 with a one-year warranty on parts and two years on the panel. The price may seem a bit high for a 32-inch TV, but then most of those TVs have a 768p panel and not 1080p as with this TV. Having said that, the price is also too close to that of some 40-inch TVs that offer most of the features available here on a larger screen. So, unless you have a space crunch, a larger screen for a couple of thousand rupees extra would be the logical choice.

Coming back to this TV, it is one of the better 32-inch smart TV models available in India given its sharp visuals and good sound. For a casual viewer, the higher resolution on a screen this size may not offer a noticeable bump in picture quality as compared to some HD-ready 32-inch models. In such cases, it would be better to save a few thousand bucks and opt for the latter. But for gamers seeking a compact higher resolution screen or those looking to extend the laptop display, the Realme Smart TV Full HD 32 is a good option to have.